I work in a 10-person office with what you might kindly call a "chaotic" Windows network setup, but it works well enough most of the time with no more than the usual shared printer that one computer can't see, shared files that some other computer won't access, etc. We've got laptops and drive boxes and stuff coming and going all the time so there's no one configuration for us to fix, and no pressing need for it. Except when everything goes wrong.

Sometimes, in some particular configuration, everybody starts being unable to see everybody else, even if we unplug/disconnect-from-wireless every computer and start adding them back again one by one. So far the debugging process has revealed that if we give computers fixed IP addresses, they are immune to whatever this is. So we could just do that with a poster on the wall that says who has what address so new stuff doesn't clash, but it feels as if I'm right next to the solution but can't see it. Any ideas?

Turn DHCP on for one device on your network...

...and off for everything else.

The Dynamic Host Configuration Protocol lets any computer, and various other things like "network appliances" of various kinds, work as a server that hands out IP addresses to anybody who asks. If you set something to "obtain an IP address automatically", it'll use DHCP.

(If there's no DHCP server, you should give every device on the network a matching subnet, and a unique IP address, as I explain in a million-year-old article here. If devices are set to automatically obtain an address but no DHCP server is available to give them that data, modern OSes will fall back to randomly picking addresses in a pre-determined range and subnet. I believe this may have actually been witnessed to produce a functioning network, in the wild, somewhere in the world, on more than one occasion.)

The ubiquity of a DHCP server as a feature of every network box, though, makes it easy for a frequently-changed network like yours to end up with more than one DHCP server on it. One server is meant to be there, probably as part of a router that that connects its clients to each other and the Internet; the other server is probably in out-of-the-box default configuration and actually will in theory connect its clients to each other, but not to anything else.

There's a simple little utility called DHCP Explorer, available as a command-line version for various OSes or as a possibly-made-by-someone-else graphical version for Windows. Run it, click the button, and it sends a DHCP request and tells you what responds.

If only one server does (and it's the router-box or whatever you expect to see...) then whatever your problem is, it's not multiple DHCP servers. If you see more than one DHCP server, then you need to go to the setup page for whatever access point, drive box, computer or whatever that is, and untick the DHCP-server option.

Keep pressure on it! Don't you die on me!

My living-room computer is an old 17-inch Dell laptop, almost 10 years old, that I'm frankly surprised still works. Except yesterday it didn't work, and today it does again.

Yesterday, about the bottom third of the screen turned into vertical lined garbage. OK, fair enough, ancient laptop finally dies but maybe I can get a new screen on eBay or something, but as I was closing the lid I caught a glimpse of it coming OK again. So I opened it and poked and prodded and discovered that if I squeezed the left side of the bezel back against the case, the screen worked again. So I got one of those little spring clamps, the ones you use in carpentry to easily hold thin things together, and put that on the side in the appropriate place, and bingo, screen perfect again. I suppose a more permanent solution, allowing the lid to close again, would be putting one of those binder clips with the silver wire handles on it, and then removing the handle wires.

So that's great and all, but my question is, why does putting a clamp on the SIDE fix it? I don't know much about laptops, but I do know that the data cable goes into the BOTTOM of the screen. What's a loose connector or something doing half way up the left side?

Answer:
LCD monitors are one of those commonplace technological things that obviously can't actually work, like jumbo jets and, come to think of it, CRT monitors too. (Just wiggling electrons around in a hair-bun of wires at the back of a giant vacuum tube steers three beams of other electrons through onto pinhead patches of phosphor? Suuuuure.)

Every square pixel of an LCD is made of three rectangular subpixels, but the screen itself is a sandwich of multiple layers from a reflector at the very back, through polariser and colour-filter and switching and the actual liquid-crystal layers in the middle, to the (hopefully) scratch-resistant frontmost layer. Even the simple liquid-crystal display in a calculator or watch has at least six layers; an ordinary computer monitor can have nine or more.

Every subpixel has its own transistor, and those transistors have to all be wired up, and both the transistors and the wires need to be pretty much see-through or the light from the back of the sandwich won't make it to the front. So you end up with a layer of transparent indium-gallium-zinc-oxide transistors, which is pressed up against super-thin transparent metallic wiring on a layer of glass. If those layers aren't pressed together any more then the transistors won't have power and the screen will go white (LCD subpixels are black when the transistor is fully on, blocking all of the light from the backlight). If the layers are slightly separated, some transistors will be connected and others won't, and the display will show random garbage.

So the side of your old LCD has, presumably, separated just a bit. Clamping it together, even through the plastic casing from the outside, is enough to push the layers back into contact. The connection to the laptop mainboard is, as you say, at the bottom through the hinge, but there are lots more connections within the LCD itself.

As my girlfriend will tell you I am one of the smartest idiots in the world, so I would like to know if my latest invention is as brilliant as I think it is.

That is a fan double adapter made of two bits of paper clip wire. You push the wire through the bottom of the connector until it comes out the top, and then you can carefully plug the bottom connector onto the motherboard and another fan onto the top.

How bad is this idea? I know paper clips are steel and that's not the usual choice for electrical wiring... what else have I missed?

Answer:
It's a... moderately bad idea.

Steel indeed is not a very good conductor - around an eighth as conductive as copper - but a little bit of it passing a low current, as is the case here, won't be a problem. Five millimetres of steel will drop only about as much voltage as four centimetres of copper of the same diameter. Big deal.

But, first, the fans you double-adapt this way must not between them exceed the power-delivery ability of the motherbaord header.

Second, if the connector comes apart - and there's not much holding it together - the paper-clip wires could short out and pop a motherboard fuse. (You could make this less likely by putting a couple of dots of glue into the top of the double-adapted plug, to hold the wires in place.)

Third, make sure you only connect the power and ground wires, as in the picture, not the third speed-sensor wire or the fourth speed-control wire. (In the picture, the top fan connector has the third wire, the bottom has third and fourth.) Actually, the speed-control wires of a couple of fans could probably be spliced together and the mobo could control them together, but splicing speed-sensor wires would confuse the mobo deeply.

Fourth, there are more reliable ways to run extra fans, like with a Molex-PSU-plug-to-fan-socket plug adapter, or with a proper wired Y-adaptor with the same electrical structure as your paper-clip adapter. This is exactly the sort of thing you could whip up as part of learning to solder; you'll be able to do simple wire-to-wire joints like this within ten minutes of picking up a soldering iron for the first time.

So I'd categorise this not as "it's stupid, but it works", but more as "slightly too stupid to work properly".

There are worse fluids

Time for another "weird gunk in the computer" letter!

I've got a nice old clicky IBM keyboard, which was suddenly made less nice by a pile of cat vomit on it. Mindful of your past mention of it being OK to clean electronic equipment with tapwater, I just ran the hot tap over the affected regions of the keyboard, then dug out what was between the keys, popping off keycaps where necessary and putting them back on when done, then I shook the remaining obvious water out of it and left it in the sun for an hour and plugged it back in... and it doesn't work.

The num lock / caps lock / scroll lock lights come on in unpredictable ways, and no keys seem to work. 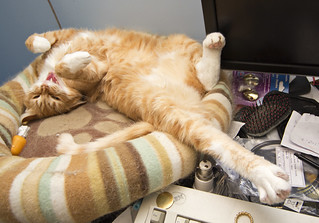 Charley has never puked on the keyboard... 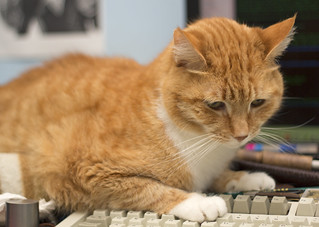 Answer:
Probably not. You just need to dry it out completely.

If you leave the keycaps on, it's difficult to get water into the workings of an IBM keyboard, or any other kind where the plastic caps cover "wells" that go down into the switchgear. (The wells also keep dust and hair and the other stuff that settles into keyboards out of the works, as you can see here.) Running water vigorously over the whole keyboard will get some water in there, though, and IBM keyboards, like everyday cheap rubber-dome keyboards, use a water-sensitive sandwich of circuit-matrices to do the actual switching.

(The click from an IBM clicky "buckling spring" keyboard is the sound of the spring buckling, not a conventional keyswitch. When the spring buckles, it moves a little see-saw device that connects pads on the circuit matrix. Other clicky keyboards are now widely available - they've become popular gear for PC gamers - and they all use discrete keyswitches, and may or may not be easier to drown than an IBM 'board.)

While the contact membranes of keyboard are damp, the keyboard won't work. This goes for all keyboards that have such a circuit in there, whether it's the capacitive type in an IBM keyboard or the simple switching matrix of an ordinary cheap rubber-dome 'board. Water can even stop those sealed floppy rubber keyboards from working, if they spring a leak.

(The rubber domes in cheap keyboards are both spring and switch for each key. The inside of the dome is conductive, and bridges contacts on the circuit sandwich when pressed down onto it.)

In some cases you may need to actually take the keyboard completely apart to clean it, or at least to dry it. But often you'll be fine if you just thoroughly air-dry the thing.

So take your damp keyboard, put it in front of an ordinary household fan, and leave it there for a long time. Like, a few days. If you put it out in the sun and the breeze it may be thoroughly dried in an afternoon, but it doesn't hurt to leave it longer.

Well, unless it rains, and returns you to square one.